“Every day I choose… to be alive. Is that not a rare joy?” – Must-Read Depression Memoirs

Reading about stunningly self-destructive and depressed people seems like it might be, well, depressing. Or at the very least, boring. If listening to people talk about their problems was fun, then why would we pay therapists so much? Hearing most people talk about their problems is boring – reading these author’s accounts of their own hells is downright exhilarating. These books are wonderful both because they are morbidly fascinating (you did WHAT to yourself?) and beautifully written. In no particular order, some great books in the “I’m-fucked-up-and-writing-about-it” genre are: 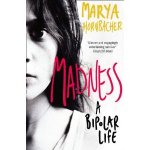 Wasted & Madness by Marya Hornbacher
Marya Hornbacher really shouldn’t be alive. Her two memoirs in tandem tell a story on the fringe, even among extreme self-mutilators. She was so severely anorexic that she weighed only 52 pounds. After gaining some weight back she drank so often that, even though she weighed less than 100 pounds, it took her 12 drinks to feel tipsy. She opened an artery in wrist, was hospitalized about a bazillion times, and sped down freeways with a blood alcohol level of .34.

And those are some of her more sensible moves.

It’s quite obvious that she must have some literary-minded guardian angel looking out for her…and thank goodness, since she is a stunning writer. Wasted: A Memoir of Anorexia and Bulimia was published in 1998, when she was only 24. The book is far from the typical eating disorder story: I thought I had to be thin, I stopped eating, people got worried, I realized I was beautiful, I was cured. Not for her. She swings back and forth between anorexia and bulimia, between seeming like she is about to be cured and plummeting down to new lows time and again. The book has been criticized mainly for the fact that it sometimes seems like she’s bragging about her own self-control. For example, she’s pleased even at one of her recovery centers that she’s the one eating the least food, that the adult-sized blood pressure cuff is too big for her, that her body has grown “a nice coat of fur” because she’s too thin to hold in body heat any other way. That the book is written by someone who is very much in the grip of the disease makes it endlessly more interesting but also much more heartbreaking than stories written by people who have the distance to separate their “current self” from their “sick self.” In the last few pages of the book, she writes, “. . .when, in your early 20s, you are staring down a vastly abbreviated life expectancy and the eating disorder still takes up half your body, half you brain. . .there are still no answers. You will die young and you have no way to make sense of this fact.” She does not hoist any message on the story, and those readers who are sick of tidy endings will love her for that.

Madness, her second memoir, was published in 2008 and answers many of the questions posed by Wasted, mainly, “Why are you so goddamn crazy?” She had remarkably managed to be seen by dozens of doctors without getting a diagnosis. She thinks she is God for a time, writes 50 pages in one day, and the next is absolutely comatose on her mother’s couch, having to be spoon-fed mashed potatoes. Like Wasted, it is not a book about the past. She composed the entire book while in a hypomanic state. Her sentences are extremely long and almost breathtakingly energetic – you can practically feel her mania flying off the page. But in spite of this fact (or possibly because of this fact) it is a gorgeously written tour through a brilliant but impossibly chaotic mind.

The Noonday Demon by Andrew Solomon
Andrew Solomon set himself an ambitious task: write about depression from just about every angle it could be written about. In this 500 page tome he has sections on the politics of depression, the evolution, the history, populations it most effects, its link to poverty, and so on. These parts are, in my opinion, fine, but not unmissable. The first two chapters, though, about his own depression and his own spectacular breakdowns are fantastic – as gripping as watching a car in front of you burst into flames, and just about as horrifying. These chapters ought to put to rest forever the belief that depression is just a case of the blues. He describes trying to leave his house and losing control of his bowel movements, doing a book reading and skipping large sections of the text because it is too much of an effort to stand up. He describes the agony of being too terrified to take a shower, all the while knowing that showers are not scary. Desperate to die without the stigma of suicide, he intentionally tries to contract AIDS (which apparently has less of a stigma?). When he fails to do so, he is miserable at this failure. His language is jaw-droppingly poetic and beautiful. At the start of the book, he sees an oak tree covered with a vines and compares it to his own experience of depression. He writes: “My depression had grown on me as that vine had conquered the oak; it had been a sucking thing that had wrapped itself around me, ugly and more alive than I. It had had a life of its own that bit by bit asphyxiated all of my life out of me. I was not strong enough to stop breathing. I knew then that I could never kill this vine of depression, and so all I wanted was for it to let me die. But it had taken from me the energy I would have needed to kill myself, and it would not kill me.” If you’re able to still stand and breathe after reading that string of sentences, read this book. 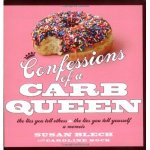 Confessions of a Carb Queen by Susan Bloch
Like Wasted, this is ostensibly a novel about eating issues and weight. It’s not. It’s about a woman so entrenched in self-hatred that she tries to annihilate herself in a slow, agonizingly torturous way. In her 20s she was a body builder who basically destroyed her body by working out – she then goes to the other extreme. In her 30s, she chooses the opposite path as Marya Horenbacher, and almost succeeds in eating herself to death, topping out at almost 500 pounds. The book has plenty of the “freak show” appeal. She describes her nightly ritual of getting in her car and recklessly driving from Burger King, McDonalds, Taco Bell, and Pizza Hut, getting two meals at each place, and finally stopping to get a nightly “snack” of a quart of ice cream. These scenes are almost amusingly morbid. She writes, “I want to order 18 cookies from McDonalds, but the woman’s already rang up my order. It’s too late. So I go to BK and order nine. I think to myself ‘See? I can cut back.'” She describes walking: “My feet were wretched and swollen; it was like hobbling on sponges. I couldn’t line up my feet and take one normal step in front of the other.” She checks herself into an obesity clinic in which she basically eats rice and fruit, and, other than one stunning relapse in which she gains 40 pounds back in one week (something I wasn’t even aware the human body could do), she eventually decides to stop trying to kill herself with grease and salt.

Running with Scissors and Dry by Augusten Burroughs
In his more famous Running with Scissors, Augusten Burroughs describes what, definitively, is the most goddamn crazy childhood in the history of the universe. His mother is obsessed with being a poet, and he spends most of his early childhood being pulled out of school so that he can sit in the living room and tell her that her current poem is “definitely going to get in the New Yorker.” At age 12, she sends him to live with her therapist, a revolting human who believes that God is communicating to him through his own shit – schizophrenia with a disgusting twist. The family has the usual gamut of alcohol and sexual abuse, but with peculiar twists – for example, Augusten is encouraged to have sex with a 33-year-old man in his therapist’s house because the therapist believes that kids should “take responsibility for their own actions.” This is one of many, many examples in which the language of pop psychology is used to justify stunningly un-pyschologically sound behaviour.

In an effort to put his past behind him, Augusten moves to New York and starts making 200 grand a year as an advertising executive. He is also drinking so much that his pores leak alcohol, and he sprays “Donna Karen for Men” cologne on his tongue to try to hide his whiskey-laden breath. His apartment is literally packed corner to corner with empty to Dewars bottles and cockroaches. In one of the most amazing scenes, he describes coming home from rehab and spending 7 hours picking up empty whiskey bottles and carrying them to the trash. The only part of the book I could have done without was the endless descriptions of how incredibly hot the crack-addict-who-he-meets-in-rehab-and-starts-dating-even-though-he-knows-he-shouldn’t is. Still, he manages to keep the self-deprecating tone that made Running With Scissors so enjoyable, even though this is eventually a story of his triumph.

All these memoirs are particularly good because of what they aren’t: stories of people who are super empowered and happy now that they’ve conquered their “demon.” Not at all. None of the authors/protagonists are even particularly likeable most the time: Marya treats her parents and lovers abominably, Andrew tries to spread the AIDS virus, Susan gets to the point where she can’t even clean herself up after going to the bathroom, and Augusten is a huge jackass to everyone who tries to help him. They are cringe-worthy stories, hard to read because it’s hard to see that degree of honesty. But they are also inspiring in spite of themselves. Andrew Solomon closes The Noonday Demon with this question: “Every day I choose, sometimes gaimly, sometimes against a moment’s reason, to be alive. Is that not a rare joy?” These memoirs encourage the same choice, and show that no matter how bad a hell you have created for yourself, it is not too late to choose something better.

How Pale the Winter Has Made Us by Adam Scovell

The Man Without Talent by Yoshiharu Tsuge

Topics of Conversation by Miranda Popkey