‘A lesser Joe Pickett’ – Below Zero by CJ Box 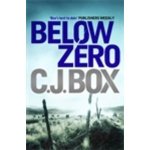 Nine books into the Joe Pickett series, our intrepid hero (after nine books he has to be intrepid in order to maintain our interest, right?) finds himself once more working away from home and on the cusp of being beset by the return of someone from the past long thought dead.

One of the great things about Box’s hero has always been his ordinary Joe quality – in many ways, the books have a lot in common with Vince Gilligan’s extraordinary TV show, Breaking Bad, in that the heroes of both frequently react in that ‘oh my God, that’s exactly how I would have reacted to those particular circumstances’ sort of way that truly draws you in. Joe is also a clean cut, moral force for good in an increasingly complex (and well rendered) world – which may seem rather straight forward but when placed against a context of the majority of thriller fiction (in which rogue cops with dysfunctional children and drug problems do battle with Mekon-brained serial killers), you appreciate it for the sidestep it is.

Unfortunately, though, the quality of the books in which Pickett finds himself do wax and wane ever so slightly. Enjoyable as they are, the bigger the canvass on which Joe operates, the less likely the events portrayed seem. As soon as Joe steps outside his comfort zone (to Yellowstone Park, say) or starts to involve police forces from other states or finds himself caught up in a bloody free for all, this reader finds himself struggling to maintain disbelief. Below Zero is one of the larger canvasses and suffers as a result. This comes in part as a result of the plot flourish on which the novel hangs – the soap opera like reintroduction of a character long thought dead. Joe and his family are (horrible word this, and the kind of word that normally makes me want to shake a reviewer until their head falls off) believable, and it is their plausibility that suffers in the face of the soap opera twist. What next, you might ask? Amnesia?  When the long thought dead character reappears alongside a mafia dude looking to atone for his carbon footprint and his somewhat two-dimensional son who spends the book barking like a serial killer who hasn’t quite cottoned on to his homicidal tendencies yet, all credulity is strained.

It’s difficult because the last thing you want to do as a reviewer is prescribe a writer’s path for them (and I definitely don’t want to say ‘more books like X and less books like Y’) but I do think I can say that I prefer the smaller more intimate Pickett books, centring on agricrime against a backdrop of rural ill-harmony rather than the kinds of stories I’d expect in the likes of Lee Childs. Willing to admit it might just be me.

Any Cop?: A lesser Joe Pickett as far as this reviewer is concerned. But I’ll still be reading Nowhere to Run when it rolls around in about 4 weeks time…