‘An interesting artifact of the times’ – Capital by John Lanchester 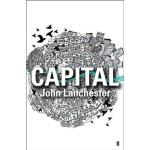 Apparently 2012 will be the Year of the State-of-the-Nation novel and as such, I guess, also the year of the State-of-the-State-of-the-Nation novel article. Amis has a new one out. Will it be as good as Money? (No is the short answer. You will find the long answer in the broadsheets over the summer I am sure, but given as the book is going to be called The State of England: Lionel Asbo, Lotto Lout, we can probably get by on the short answer for now.)

The first up of the Big Hitters of State-of-the-Nationing is John Lanchester’s Capital. It has been out for about a fortnight now, and has been slapped and curtseyed in equal measure. I should have slapped or curtseyed it myself two weeks ago, but it is so bloody massive it has taken me a while to get through it. Lanchester clearly saw no benefit in seeing the nation (and its state) via one or two characters. He wants to give us the lot. And so we get, in no particular order, a posh-ish banker from the old school network, his young maths-savvy assistant, his spoiled wife, a teenage football sensation from Africa, a Polish builder, a Zimbabwean traffic warden, a Hungarian nanny (the last two of course far too qualified for their jobs), an old woman, an Asian family, and a Banksy clone called Smitty. Oh, and a lawyer, and the footballer’s dad, and a Chinese refugee, and a…

Essentially we have a Richard Curtis film worth of cultural stereotypes (the Asian family own a corner shop AND one of them get falsely arrested under suspicion of being a terrorist for fun’s sake – TRY HARDER LANCHESTER).

This is the major failing of Capital, the characters write their own storylines. A Zimbabwean traffic warden. Will she be racially abused? Will she ponder people’s attitude to parking? Will she face being sent back to Zimbabwe almost as soon as she is introduced? A posh-ish banker. Will he fail to get a big bonus? Will his bank be affected by the banking crisis? All very infuriating, because Lanchester is a great writer, and even as you curse the development of an African footballer’s storyline, knowing something will inevitably go wrong, you cannot help but admire his prose (Lanchester’s not the footballers).

The problem with State-of-the-Nation novels is that it is sometimes hard to see how well they capture the moment until the moment has passed. Today, Capital feels too fractured, too over-reaching, but these are fractured and over-reaching times. Maybe he has approached the subject perfectly: in ten years time we might look at Capital as a minor classic. I suspect instead we will view it as an interesting artifact of the times, a book that tried to encompass 2008 completely but in doing so, sacrificed the novel’s abilities to engage with the reader.

Any Cop?: Ask me again in a decade.