‘Just there, there, but always out of reach’ – That Deadman Dance by Kim Scott 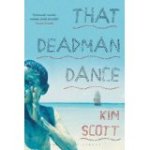 Kim Scott’s third novel That Deadman Dance arrives garnished with awards from his native Australia. And it is his native Australia that this book concerns itself with, specifically the arrival of the British convicts and their guards and the French and American whalers whose visits become more extensive as the years pass.

The story begins in 1833 with Bobby Wabalanginy guiding the latest ship worth of settlers to his island. Bobby – first name given to him by the settlers unable to pronounce his aboriginal name – is the character who holds this non-linear and somewhat disjointed novel together. As a young boy, he welcomes the settlers to his land and along with Wunyeran, another of the Noongar tribe, and Dr Cross, one of the settlers, tries to build a harmonious community. However, as time progresses incidents of brutality and theft on both sides lead to a rift that we know will drive the communities further apart.

The novel is told in a non-chronological order, jumping from 1833-35, back to 1826-1830, forwards again to 1836-38 and then to 1841-44 with the occasional prolepsis to Bobby as an old man telling stories of the old days to any tourist who cares to listen. The chapters, which are largely short and otherwise fragmented, reinforce this disjointed structure, sometimes making it difficult to grasp whereabouts in the story we are.

Where the novel really comes to life is in the passages dedicated to describing the whaling:

“Each playful whale sank from sight immediately its would-be harpooner rose from his oar to grasp his great dart, and each boat, rather than waiting for the whale to rise again, rushed for the next whale in its path that was just there, there, but always out of reach.”

Unfortunately, elsewhere the book suffers from what seems to be Scott’s desire to stand back and let events play out without him or us empathising with any of the characters, whether Noongar or settler. This leads to a flatness in the characters – they never really feel like people, more ciphers for the history he wants to reenact – and this is a shame because the story he has to tell is an interesting one and a defining point in Australia’s history.

Any Cop?: If you’re interested in Australia’s history it’s a well-researched account of an important period otherwise it’s just a bit dull.