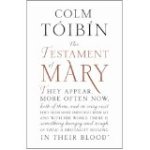 The fashion for reimagining Biblical stories (in the last couple of years we’ve had Richard Beard’s Lazarus is Dead, Philip Pullman’s The Good Man Jesus and the Scoundrel Christ and James Frey’s The Final Testament of the Holy Bible, among others) continues apace with Colm Toibin’s contribution, which positions Jesus’ mother Mary as an elderly lady dealing with shady characters who are looking to put words in her mouth (itself an interesting literary conflict – Toibin putting words in the mouth of a character who feels words are being put in her mouth). Mary’s version doesn’t tally with the official version, to the chagrin of the men who come to visit her each day and want to push the ‘he died to redeem us’ line; to Mary, her son was her son, a man born of man.

‘I tell the truth not because it will change night into day or make the days endless in their beauty and the comfort they offer us, we who are old. I speak simply because I can, because enough has happened and because the chance might not come again.’

There are interesting intrigues at play in the shadows behind the stories Toibin chooses to recount (Lazarus, walking on water, water into wine, the crucifixion), misfits and stranglers and malevolent bureaucrats who help to imbue what are arguably the most familiar stories in existence with a compelling page-turning quality – but there is more to recommend The Testament of Mary than this. Largely eschewing the militant atheism of Pullman or the comedic elements of Beard, Toibin tells a sad tale of a woman looking to rescue her son from history, her culpability with the authorities in trying to forge an earlier intervention when it was still possible, she thinks, to save him and her guilt about running away when the threat turned on herself (guilt assuaged in an ‘official’ account that saw her remaining to clean the body).

Ultimately, however, she realises that the official account will win the day. ‘Maybe when I die,’ she tells us,

‘It will be as though what I saw and felt did not happen, or happened in the same way a small flap of a bird’s wing in the high sky happens on a day when there is no wind.’

Although you can’t help but wonder if Toibin’s recent stay in academia contributed to the genesis of the book (the idea seems to have its roots in the ‘fashion a piece that views a well-known event from an alternative perspective’), and there are times when the weight of literary powers Toibin brings to bear feel too great for a book that only just manages to clock in at 103 pages but for all that it is an enjoyable and thoughtful read that does offer a new, interesting and different view of a familiar tale.

Any Cop?: Not a major work, by any means, but an interesting read all the same and certainly one for anyone keen in mining this early twenty first century seam of Biblical re-evaluation.