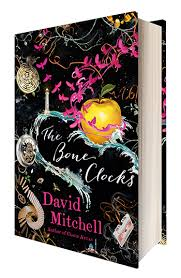 Since I first read number9dream, I decided David Mitchell could do no wrong. Black Swan Green, Cloud Atlas and The Thousand Autumns of Jacob de Zoet confirmed that opinion. So, before I read The Bone Clocks, I knew I’d give it a great review. And then I read it.

It opens in the mid-1980s with 15-year-old Holly Sykes. Her parents don’t approve of her 24-year-old biker boyfriend, but like so many teenagers, Holly knows this is real love. She decides to show how much she cares by surprising her man very early one morning. Everything is set up for her to catch him with another woman. And she does. And just to complete the teen drama trope, the other woman is her best friend. Humiliated, Holly runs away from home and finds herself in some sticky situations only to be saved, every time, at the very last moment by some saviour suddenly appearing from nowhere, and Holly survives to regale us with even more thoughts on her teenage suffering.

At this point, I checked the author’s bio on the inside cover to make sure this was the right David Mitchell (there are many of them out there). Assured that it was, I then flicked through the remaining 550 pages and wondered if Mitchell had gained that dubious honour of becoming an author that no longer gets edited (remember how the Harry Potter books got more and more bloated?). But I persisted.

And yet, despite how that story might seem from this (unjustly) short summary, it’s clear that this is the work of the real David Mitchell:

‘The ski-lift guy clicks our rail into place, and I resist a joke about being swept off my feet as Holly and I are swept off our feet … The ravine opens up below us and, as I’m mugged by vertigo and grip the bar, my testicles run and hide next to my liver.’

The prose is as gratifying and exact as in any of his previous novels, and his expertise in shifting voice and genres is as remarkable as ever. I realised how the whole young adult angst was deliberate, not to mention a fair challenge for a man in his forties.

Mitchell takes the reader through time, from 1984 to 2043, with six individual stories, each following a different protagonist. And, like the comet-shaped birthmark in Cloud Atlas, there’s a link between each story. This time it’s Holly Sykes, plus an extra narrative thread with two groups of battling immortals, the Anchorites and Horologists. This latter, fantasy aspect is kept mostly to a minimum, with characters from each side occasionally appearing to yell phrases like, ‘Use your Deep Stream voodoo now,’ and ‘Psychoteria of the Shaded Way’.

The mix of genres and voices will, as with Cloud Atlas and Mitchell’s first book, Ghostwritten, provoke discussion about preferred characters and which bits can best be skipped over. But once you’ve read all the stories it really is difficult to pick out a favourite, mainly because it still feels like you’ve just read a complete novel. I wasn’t so impressed with the teenage Holly Sykes story, but that’s only because it’ll take another read to fully appreciate every detail.

Any Cop?: The use of separate stories to tell a single novel will draw many obvious comparisons to Cloud Atlas. The advantage here is that none of the stories are interrupted halfway through. That’s not to say this is better than Cloud Atlas. The similarity undermines the originality, for one. But if Cloud Atlas was a nine (and I think it was) then The Bone Clocks comes very close to an eight. But I won’t really be sure till I’ve read it again. And again.

The Death of Jesus by JS Coetzee

Braised Pork by An Yu

Things in Jars by Jess Kidd

The Minotaur Takes a Cigarette Break by Steve Sherrill

You’re Not Listening by Kate Murphy

Not Working by Josh Cohen

The Island Child by Molly Aitken

This Mournable Body by Tsitsi Dangarembga