‘It’s a bloody beauty!’ – Everything is Teeth by Evie Wyld and Joe Sumner 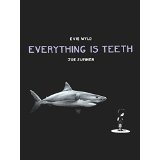 Anyone who has read either of the previous books written by Granta Best of British novelist Evie Wyld will have probably guessed that she has some experience of Australia. After the Fire, a Still Small Voice spends much of its narrative in the outback, while All the Birds, Singing flits between Australia’s vast land and seascapes and an unnamed and obscure British Isle. In Everything is Teeth, her first graphic novel, we find Wyld delving deep into the meaning of her semi-Australian upbringing. We discover how summers with the Australian half of her family, in the brutal heat of coastal New South Wales, left a deep and lasting impression on her, one that still holds a place in her life, and especially her fiction, right up to this very day.

Until now, this impression was perhaps best represented by a scene in After the Fire. A particularly affecting moment occurs

when Frank, the protagonist, narrowly escapes a shark attack. Not only is this a frightening event in its own right, but it also perfectly signifies this novelist’s belief that nature is always lurking, always ready to pounce and change our lives in ways we weren’t expecting.

Everything is Teeth shows that this belief was borne from an obsession with sharks. After hearing stories from her parents and extended family about their scrapes with the sea’s greatest predator, Evie begins to imagine them playing a part in everything she does. She sees them stalk her on the street, she keeps her feet on the sofa so they won’t nip her toes from the carpet, she watches from the shore as her brother and mother swim, sure that at any second she’ll see a red stain in the waves.

What is most interesting about this obsession, and perhaps this book, is that this preoccupation with sharks is not necessarily manifested as fear. In fact, sharks become something she cares about deeply. Two scenes in which the childhood Evie come face-to-face with mistreated members of the species show just how tender her feelings are for these animals. And we also see these tender feelings morph into the family narrative, making this not just a tale of a child’s obsession with the sea, but also a touching memoir that considers how family and circumstance shapes the child into the adult.

And I’ve said all that without even mentioning the graphic element. But let me tell you this – there is no possible way that can go ignored. In fact, Joe Sumner easily deserves as much of the credit as Wyld for making this such an impressive piece of work. I’ve read many graphic novels where the pictures don’t really do enough of the hard graft, or where the drawings are wonderful but the words and the story don’t do them justice. Here, we have impeccable art mixed with the prose Wyld fans have come to admire already. It just works. Often there’ll be pages without a single word, but the power of the pictures does enough without them. I’m thinking particularly of the images which show the young Wyld being stalked down the street by a shark – if they’re ever available as prints one will be taking pride of place above my fireplace (okay, I don’t  have a fireplace, but you know what I mean).

Any Cop?: In a word, yes. The perfect marriage of sparse but beautiful prose with elegant and effective imagery and evidence that Wyld can write just as well in a child’s voice as she can in an adult’s. Also, an intriguing insight into the life of one of our most exciting writers. As the Aussies might say – it’s a bloody beauty!