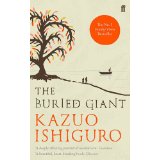 Axl and Beatrice are an elderly couple living in a tiny village, a dirt-warren for their house, gentle farming work to fill their days. Their nights are passed in full darkness, their local council having agreed to ban them from owning candles. They are conscious of a fog in their brains: it keeps them parted from their memories – beyond their immediate circumstances they recall nothing: how they came to be there, why they remain there, how they met. And not only them – the fog has an effect on everyone: it’s an epidemic.

But certain trace recollections do make themselves known: the couple convinced they have a son a few of town away, sneak away to find him. Their journey is a perilous one, with Beatrice feeling increasingly unwell and Axl beleaguered by fragments of memory which are familiar yet incomprehensible: a woman with red hair, a walk he took with their son. They seek shelter in a village where they encounter a brave knight and a boy who, the locals claim, has been rescued from a band of ogres. All four of them – Axl, Beatrice, knight and boy – set out to cross the mountain. Here they encounter the famous Sir Gawain, nephew of King Arthur, now grown old and doddery, having spent his dotage fruitlessly searching out Querig, an elusive ‘she-dragon’ who, it is said, is the cause of the amnesia-inducing fog.

Kazuo Ishiguro is one of Faber’s big beasts. During his absence for the past ten years, his reputation both as a prose stylist but more so as a storyteller, have grown, thanks in part to 2010’s film adaptation of Never Let Me Go. Anticipations are high. To emerge from a decade’s hibernation into this glare of expectation with The Buried Giant – a novel set in post-Arthurian Britain, replete with warrior-knights, ogres and dragons – is a brave choice, one which invites the charges of literary tourism (is one of our most precise literary artisans really cruising the fantasy romp scene?) and of grand-folly-ism (it’s difficult, on discovering that the protagonist of The Buried Giant‘s is named Axl, to avoid being reminded of Chinese Democracy).

In truth, Ishiguro’s outing into fantasy isn’t nearly as outré as it may at first seem. Fantasy novels tend to be quest narratives writ large, the imagined topography defined by psyche and politics, the characters by their gloomy pasts. Likewise, most of Ishiguro’s novels have each been framed around a voyage: The Remains of the Day is essentially a road-trip; When We Were Orphans an outright detective story; The Unconsoled, his masterpiece, a Kafkaesque puzzle in the form of a taxi-ride.

The Buried Giant too fits this mould. The various journeys taken by the novels’ characters generate acts of remembrance: jigsaw pieces of memory return, adjoining to one another to form strands of detail and, gradually, a picture of a past emerges, piecemeal yet ominous. We learn that after a war between the Britons and the Saxons peace now reigns. But it is an uneasy, uncertain peace, one which was only brought about at a cost. The Middle Earth trappings are an attention-grabbing curio but the novel’s central concerns – hidden memories, our secret selves, the unreliability of narrative – will be familiar to even the most casual of Ishiguro’s readers.

His prose too has, for the most part, retained its characteristic mesmerising elegance, occupying a magical borderline between description, clear-eyed and unadorned, and starkly poetic. It’s also fascinating to witness a writer who has a made a name for himself as a crafter of untrustworthy or deluded narrators par excellence return with something which both seeks to bring a new inventiveness to the mechanics of this mode of writing whilst simultaneously playing against type: beyond an ‘I’, but it’s an old-fashioned, all-seeing narrator, one which introduces us to the story then retreats to the background, and two ‘reveries’, chapters of Sir Gawain’s internal monologue, there is no single character-narrator. In fact, of the books mentioned above, the one which The Buried Giant shares most similarities with is The Unconsoled, Elegance of structure is eschewed in favour of a kind of tall-tale picaresque, with scenes weaving between unshowy realism and Kafka-like impressionism. Scenes come and go with little obvious connection – a couple bicker in an abandoned villa, strange devices are found in a monastery, untended children in a mountainside house poison a goat.

At the novel’s emotional core is a simple relationship. The portrayal of an elderly couple’s affection for each other is touching – Axl calls his wife ‘princess’ throughout and is loath to leave her side – and the dark memories which toil in their minds and threaten to cleave them apart provide the novel’s long-term tension. Axl, a gentle optimist, tells Beatrice: ‘… the feeling in my heart for you will be there just the same, no matter what I remember or forget. Don’t you feel the same, princess?’

Beatrice is less sure. Locked out of their past, their bond is uncertain and she vocalises the anxieties Axl dare not speak:

‘I wonder if what we feel in our hearts today isn’t like these raindrops still falling on us from the soaked leaves above, even though the sky itself long stopped raining. I’m wondering if without our memories, there’s nothing for it but for our love to fade and die.’

Hefty literary allusions abound, although curiously little in the way of Arthurian legend. There is Kafkaesque vibe to Axl and Beatrice’s village with its burrow-like houses and domineering council; Beatrice feels like a clear nod towards Dante’s Paradiso; and Sir Gawain, an elderly bewhiskered knight roaming the countryside with Horace, his long-suffering horse, carries more than a hint of Don Quixote. Indeed, the whole thing makes an interesting companion piece to JM Coetzee’s The Childhood of Jesus, another text of self-invention, misty pasts and liberal splashings of Cervantes.

One of the novel’s more compelling elements is Ishiguro’s careful handling of the folklore and fairytale world which lurks in the background. Is this a novel in which the sprites and spirits which the characters believe in real? Are the ogres from whom the boy is rescued by the knight (along with proof – a blubbery lump of flesh) real? Is the she-dragon whose breath causes the collective amnesia real? The answers to these questions are kept tantalizingly obscure.

That is until a scene which takes place roughly midway through the novel, in which Ishiguro pushes us definitively in one direction (I’ll avoid letting you know which).

This marks something of a turning point. It’s in the book’s second half that its floorboards begin to creak: there is action – an encounter with a subterranean beast, an escape from a fiery castle, a few sword-fights – but they’re almost all fudged, taking place hastily off-stage or recounted by secondary characters; these secondary characters themselves are fairly interchangeable, their clipped dialogue baldly delineating their thoughts and actions; the setting develops a perfunctory anonymity – rarely can scenes of mystic and mythic proportions have been acted out in huts and mountains of such threadbare description; the narrative grows erratic, flipping not just between characters but between perspectives – Gawain seems to experience ‘reveries’ solely to speed the reader round the tricky obstacle of unearthing the dark memories buried in Axl’s unconscious, defying the story’s hitherto deft internal logic: for a book about collective amnesia, many of the characters turn out to be blessed with oddly perfect (if intermittent) recall.

The pace increases in the final section, with many of the key mysteries which have pulled the reader along – Who is Axl? Who is Beatrice? Who is their son? – being wrapped up in the final few pages. Other question marks – the red-headed woman, Beatrice’s mystery illness – are left to be guessed at. The reader’s instinct is to try to locate a deliberateness, expecting them to find them tethered to a root somewhere in the misty terrains of the human experience. This, after all, is Ishiguro. But with the book’s halting mechanics having been so rudely revealed, it’s difficult to summon the confidence.

Many of The Buried Giant’s foregrounded themes – the lie of The Greater Good, the myth of the guiltless hero, the peace which demands bloodshed – seem very much influenced by the trauma and failure of Britain in Iraq, which leads me to think that the book really did begin life back in 2005, possibly even earlier. There’s space in the dungeons and dragons subject matter to accommodate more contemporary concerns – immigration, radicalism, the rise of a toxic rightwing nostalgia – but if any of these are addressed, however allegorically or abstractly, I’m afraid they slipped by me.

Any Cop?: The overall sense the reader is left with at the end of The Buried Giant is of Ishiguro the stylist – slow, subtle and graceful – making an effort to get to grips with the cavalier rough-and-tumble of old fashioned storytelling. It’s a shame it’s not more convincing. But if the unevenness of structure and haphazard pacing suggest Ishiguro isn’t a natural yarn-spinner, the finely nuanced love story at the centre of the novel is a reminder of how formidable and astute a technician of the human heart he can be.

The Glass Pearls by Emeric Pressburger

Pretending is Lying by Dominique Goblet

Maps of Our Spectacular Bodies by Maddie Mortimer

The Unfolding by AM Homes

The Book of the Most Precious Substance by Sara Gran