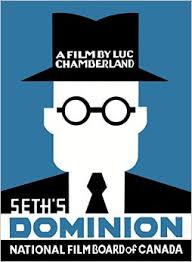 Seth for the uninitiated is a comics artist, a graphic designer, a stylish, interesting, unusual human being who is as famous for his books – including It’s a Good Life If You Don’t Weaken, Palookaville, George Sprott and Clyde Fans – as he is for his interest in building intricate models of buildings (which comprise a small town called Dominion). Luc Chamberland’s film is a must-see for Seth fans,  for a whole host of reasons: not least the fact that we get to spend time in Seth’s company. Seth, ever so well dressed, ever so softly spoken, ever so intriguing. These days, when presented with a documentary about a comics artist, you can’t help but worry it will be like Terry Zwigoff’s Crumb – which, whilst being an excellent documentary, was unexpectedly sad and disturbing. Seth’s Dominion is not disturbing, though – it’s extremely charming. We see Seth at his work, having his hair cut (at his wife’s hand, she’s a stylish barber), in the company of friends. We also see – and this is a massive recommendation – Chamberland’s animations of a selection of Seth’s comics, worth a DVD in their own right. We glimpse Seth’s upbringing, his devotion to his mother, his troubled relationship with his dad (and, sweetly, their eventual reconciliation of sorts). Perhaps best of all we get to hear Seth consider his work. And all in a very compact 42 minutes. But that, in the words of Dr Seuss, is not all. Oh no. That is not all.

The book in which Seth’s Dominion appears is a sort of concertina affair: the first half

opens to present us with photographs of Seth and other comics luminaries (such as his buddies, Chester Brown and Joe Matt, as well as Daniel Clowes, Charles Burns, Chris Ware, Robert Crumb, Chip Kidd, Adrian Tomine etc), as well as pics of the young Seth (with wild flowing blonde hair) and of his family. The pics of Seth with his wife are worth the purchase price alone (Seth poses in his slightly olde world garb looking like a strange combination of Steve Buscemi, David Lynch and William H Macy). They seem like a sweet couple. Ah, you might think though. You’d have to be a real fan to buy a book that contained pics and a DVD about a comics artist if you hadn’t sampled the comics themselves. Which is where the third part of this delightful package comes to the fore: there are samples from It’s a Good Life… as well as a dozen other examples of his work, each chosen to show what he is capable of – and including a lovely inside cover mounted view on what he makes of the documentary itself.

By this point in proceedings, you may be thinking Seth’s Dominion sounds like quite good

value, sounds like both a treat for the fans and also a good way to pop your toe in the water if you haven’t read him before (and that would be true). But Seth’s Dominion still has more to give, by way of lovely DVD extras: there are additional cartoons (based on drawings Seth made when he was a child), there is a nice interview with filmmaker Luc Chamberland (Seth may not have been quite as easy a subject as the film makes him appear – and in fact you can’t help but wonder what might have been if Chamberland had been able to fashion for Seth what Brett Morgen did for Kurt Cobain in Montage of Heck) and there is a 56 minute film of Seth talking at a Drawn & Quarterly conference, which is itself a delight in its own right and worthy of a DVD release on its own. This is what you call, then, massive value for money. But value alone is a questionable merit. Thankfully, the whole package is awash with moments that will leave you smiling with that curious book happiness that is ever so hard to explain to non-readers.

Any Cop?: Seriously, what are you waiting for?