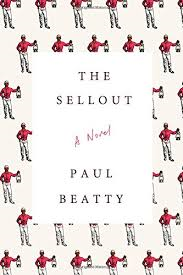 You’ll know by now of course that Beatty’s claimed this year’s Man Booker Prize with The Sellout; before that, he’d already won the National Book Critics Circle Award for Fiction. Everyone’s falling all over themselves to heap praise on the book, and we were keen to join the queue: I mean, it sounds amazing, right? A boy (we don’t know his first name, but his last name’s Me) is brought up on an urban farm in Dickens, a black L.A. ghetto, by his ever-so-slightly mad sociologist father – a man who conducts experiments on his own son, works with the cops as a ‘nigger whisperer’ (a sort of hostage negotiator amongst his own community), and claims that his forthcoming memoir will make their fortune – and when that father is shot dead by those same cops, his son finds that the inherited farm and the nigger-whispering gig isn’t giving him sufficient purpose in life. When his town is taken off the L.A. maps (it’s just too crap) he reckons it’s bad for local morale, and so he decides to reinstate Dickens by working on cohesion and collective identity amongst the black community: that is, by reintroducing racial segregation with the help of a volunteer slave and a determined schoolteacher. And – as you’d expect – he ends up before the Supreme Court, in a case called ‘Me v the United States of America.’ It’s an absurdist satire skewering discourses around race and gentrification in contemporary America that’s written in a relentlessly cultural-reference-laden, maximalist, breakneck style that’s both very funny and exhausting to process. And it seems like just about everyone out there has been blown away by it.

Except us? Maybe? We’ve been pondering a while and we still can’t quite call it. It’s an odd one. It is a brilliant satire. Beatty’s got a fantastic handle on the complexities of racial identity and how that’s represented in the media and in popular culture; on how personal identity is enmeshed with group identity; on how urban geography is mixed up in all this; and on the intersection between self-respect and self-hatred. The book’s got socio-historical reference points jumping off every page. The characters are painfully funny, from the farmer-academic parent who sets up an intellectual hub in the local branch of Dum Dum Donuts, to the aging former child-star, Hominy Jenkins (featured in skits so racist they’ve been excised from the studio’s records), who demands that the narrator (the titular ‘Sellout’) take him on as his slave. The narrator, of course – scion of a sociology lecturer that he is – is keenly aware of the contradictions and bigotry inherent in his plan, but hell, he does it anyway, and it works: the community is successfully reinvigorated by re-segregation, and (spoiler) Dickens is put back on the map thanks to the adoption of apartheid and much to the reader’s ensuing discomfort (or so we’d like to hope). Our narrator – and his creepy sidekick Hominy – possess a kind of twisted genius that’s compellingly painful to behold. It’s a horribly entertaining book, packed with political and cultural jibes and references to actual Supreme Court cases that take us right the way up to the Obama administration, and as Trump gears up to move into the White House, and racism and xenophobia (amongst a cornucopia of other ills) take their place at his table, it’s particularly fitting that this book’s getting its moment in the sun.

So what didn’t we like? It’s a very meandering text, a strategy which allows Beatty to showcase a breadth and density of knowledge and address a range of issues that’s genuinely awesome, but a strategy that also results in a book that’s less the inevitable working-out of a premise (the Supreme Court case is more or less sidelined throughout) and more of a series of complex riffs on a theme. Now, that’s not a flaw, per se, but a structuring device that you’ll find engaging or otherwise according to what kind of a read you’re after. We’re not particular aficionados of the A-B Franzen-esque school of book-writing, but in this case we’d have liked a tiny little bit more plot to draw out the consequences of Me’s actions; we found the book erred too much on the side of the picaresque. But, that said, to carp too much on this front feels petty: in every other respect, this is literary invective at its best, and we wish more writers were gunning for the big issues with such daring.

Any Cop?: Give it to your racist neighbours/relatives for Christmas and watch them squirm.