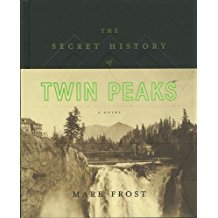 There are two types of people in the world, those who revere Twin Peaks and those who don’t. Actually, there are probably three, as the former can also be separated between the fair-weather variety who thought the drama ‘lost its way’ after viewers found out who killed Laura Palmer, and the true believers who were hooked all the way through on the addictive blend of gothic mystery, arcane whimsy, noir cinematography and alt-soap high-melodrama which up-ended the very essence of television way back in 1990. I am most definitely in this most devout sub-group, and this book by Mark Frost, co-creator of the series with David Lynch, is aimed squarely at sating the obsession of our choir of the faithful.

From the title I had thought this might be a ‘making-of’ memoir – I couldn’t have been further off-piste. The sub-title is ‘A Novel’, though in fact it’s a much stranger artefact than that. And ‘artefact’ is very much the word; this exquisitely presented, immense hardback brick of a tome pieces together facsimiles of documents spread over three centuries; notes, letters, reports, newspaper and magazine clippings rolling back over the decades, teasing out conspiratorial mysteries which align, one way and several others, with the weird history of the town of Twin Peaks.

There is a twin conceit at work here. Firstly, that a mysterious figure known only as ‘the archivist’ has compiled a dossier of this scrapbook history of the town, its surroundings and inhabitants, which reaches back to through the past century and further, with his or her own commentary on the events unfolding. Secondly, that this dossier has in itself come into the hands of the FBI, with one of their own agents providing a further commentary on both the source material and the archivists own persuasions and objectives.

The book plays with the legend of the series, revisiting characters, examining their past lives, gathering them together within the eldritch history of the town and its citizens. In fleshing out elements only mistily hinted on the screen however, the mythology which emerges is far more classically conspiracist than what we saw in the programme. Indeed, every stray paranoid ‘secret world’ motif is at work:- Masonry, Illuminati, UFO / Roswell cover-ups, even the Kennedy assassination. The lesser known mysteries surrounding jet engine creator and occultist Jack Parsons and the strange death of Thomas Jefferson’s explorer friend Meriwether Lewis are also key elements – and far more intriguing to me at least as I came to them new. There was always an element of this to Twin Peaks, though the extent to which this takes centre stage here brings a different, and in some sense more prosaic tone to that of the series.  What saves it from being a Da Vinci Code-style boilerplate is the intricacy with which the secret world agenda is bound up with the town’s own mythology, and the successful ambience created in suggesting diabolically awe-inspiring otherworldly forces at work. The Black Lodge we know from the programme is not mentioned by name, but it seems both this and the fiendish Bob are central to its cosmology. The atmosphere is more Lovecraft than Dan Brown.

When characters from the series itself surface they do so with some aplomb. It is a joy for a fan to be reminded of the love triangle between Big Ed Hurley, Norma Jennings and her thuggish husband Hank, the warring families of the Martells and the Packards, the femme fatale treachery of Josie Packard. A narrative from Native American deputy Hawk Hill is a particular highlight, the character’s bluff wisdom superbly characterised and evoking the clandestine camaraderie together with his fellow BookHouse Boys with great finesse. The case notes from Dr Lawrence Jacobi, the town’s psychedelic psychologist, are also immense fun.

Twin thrills then from this Twin Peaks: the quirky intellectual thrill of the meta-mythology, and a rewarding visit to much-loved characters, explored with skill by one of their creators. For all its enjoyment though, the ultimate effect for me was one of slight un-fulfilment. As co-writer and creator Frost is entitled to do with his characters as he will, but the reliance on the more ‘classic’ conspiratorial motifs mean the work is at times closer in spirit to The X-Files than to Twin Peaks, and as any Peaks acolyte will tell you, that is very much the bronze prize of cult 90s TV. For a work which sometimes successfully channels Lovecraft, this could be fairly compared to the later works by his devotee August Derleth which developed on Lovecraft’s mythology, but which many devotees felt cheapened and over-simplified the masterwork with black and white cosmology.

Ultimately, what is missing is David Lynch. The uncanny alchemy in the imagery which he brings to the screen, aided and abetted by the unsettling score of Angelo Badalamenti, cannot truly be captured in the written word, brave though the attempt is. As enjoyable as Frost’s book is here it is a mere hors douevre to what we’re really after – the new series. It’ll do for now though.

Any Cop?: An interesting artefact, curio catnip for devotees, a brave attempt to put the spirit of the programme on the page, failing but often still inspiring in the process.

Notes From an Apocalypse by Mark O’Connell

Rest & Be Thankful by Emma Glass

Hollow in the Land by James Clarke

How to Pronounce Knife by Souvankham Thammavongsa

The Mirror and the Light by Hilary Mantel

Sorry for Your Trouble by Richard Ford

We Are Attempting to Survive Our Time by AL Kennedy

If It Bleeds by Stephen King

The Tainted by Cauvery Madhavan