“Like an old man yelling at clouds” – Phone by Will Self 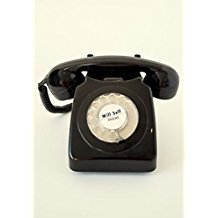 The final volume of a trilogy of novels, preceded by Umbrella and Shark, Phone loosely concludes the chronicle of the De’Ath family and Dr Zack Busner, as well as returning to a number of Self’s signature concerns: the downfall of Seventies liberal idealism, the war in Iraq, and the emptiness at the core of Western capitalism.

The novel begins with Busner, a recurring character throughout Self’s fiction, naked in the Podium restaurant of the Manchester Hilton. Now 78, he cuts a shabby figure, ‘his big fat old naked pitted pitifullybald buttocks… swinging’ and his penis hanging distressingly close to a tray of sausages. As he is hustled out of the dining area by security, this formerly distinguished psychiatrist is referred to simply as ‘the old loony’.

Busner’s circumstances mirror the diminished regard in which his achievements, and values, are held in the present day. The freewheeling, non-hierarchical philosophy he espoused in his Concept House days has been roundly rejected by the medical establishment, and the old Friern Hospital, scene of his experimental treatment of encephalitic patients, has been ‘developed’ into properties. Busner’s interior monologue is similarly out-of-time, filled with references to figures like Rab Butler, and Seventies union leaders.  As the hotel incident demonstrates, the emperor now stands naked in front of his subjects.

Hans Christian Anderson’s streaking monarch is not the only royal figure bought to mind by Busner. As Phone’s narrative develops, it includes several references to King Lear: Busner has apparently divided his property up amongst his children, ‘withdrawing from worldly affairs, and, yes, slipping from social conventions’.  Room 25 of the Hilton Hotel is his blasted heath, presented as a similarly liminal space by Self:

‘The past is like an international hotel chain: it doesn’t matter where you are in the world, the corridor looks exactly the same’.

Memory, and the management of information, is Self’s key concern throughout Phone. While Busner’s children try to work out what to do with their ‘embarrassing’ and ‘disorderly’ father, his grandson Ben provides him with an ‘auxiliary memory’, in the form of a smartphone. Self tells us that

‘psychotics – modish, as they always are – were incorporating the new digital technologies into their delusions… faster than Silicon Valley can innovate’.

Self queries whether technological advances can cure the West’s collective psychic breakdown, or whether they are simply another symptom. Whether this seems new and original, or like an old man yelling at clouds, probably depends on which side of the generation gap you’re on.

In addition to the ongoing saga of Busner’s life and career, Phone also rounds up the story of the De’ath family, which began with Audrey, the munitions worker (and later Busner’s patient) in Umbrella, and continued with Peter (‘Kins’), the conscientious objector whose story was featured in Shark. In Phone, we are introduced to Jonathan, an intelligence officer also known as The Butcher. In these sections of the novel, Jonathan engages in regular dialogue with his own penis, ‘Squilly’, a narrative technique first used, I believe, in Tommy Lee’s autobiography.

Although Jonathan’s narrative allows Self to revisit his concern with the British military fiasco in Afghanistan and Iraq, first touched upon in The Butt (probably his worst work to date), the primary concern is once again with information. Jonathan’s eidetic memory, a natural advantage in his profession, is overwhelmed by the ‘the great and never-ending data harvest’, which expands exponentially ‘with each new generation of recording devices’.  Furthermore, the stresses of maintaining his work, whilst also engaged in a covert and lengthy relationship with Gawain Thomas, an officer in the Yorkshire Hussars, leads Jonathan to rely on SSRI’s – one side effect of which is a loss of memory.

When Jonathan’s downfall arrives, however, it is not from memory loss, but memories found. Breaking all the rules of his trade, Jonathan has stored data relating to his relationship with Gawain, from the beginning, and the evidence is found by Busner’s grandson Ben, an autistic young man with a conspiratorial bent. While Ben’s father, a schizophrenic, tries to hide himself from satellite rays, Ben has become adept at navigating both the neural networks of the mentally ill, and the information networks that Jonathan deals in, using his phone to organise his life and acquire secret knowledge.

In keeping with Self’s rather Eeyorish recent public pronouncements, the modern day setting of Phone is less vivid than that of its predecessors. The world inhabited by Busner and the De’aths in their glory days has moved on, leaving them to adapt or else become obsolete. Gawain’s regiment, the Yorkshire Hussars, has suffered ‘death by a thousand defence cuts,’ reduced to hawking weapons at Middle East arms fairs; impotent onlookers at the collapse of Yugoslavia, Gawain was awarded a medal for ‘building a new shower block in an abandoned Bosnian paint factory’. His regiment’s involvement in Iraq is nothing more than an ‘end-of-the-imperialist-pier show’. The suggestion is that technology is powerless to stop a general downward trend, and may even be facilitating it, as analysis, knowledge and insight are overlooked in the present day’s ‘massive privileging of the eye over the other sense organs’.

It’s a fair point to argue that our relationship with developing technology should be a key issue for today’s novelists, and that there are a great many ethical and practical questions to ask around the dark web, surveillance, data mining, the future of money, and much more. However, compared to recent work by writers like John Lanchester and Andrew O’Hagan, to pick two of his peers, Self seems a little unengaged, lacking in intellectual curiosity. He observes that we have ‘only the haziest understanding of the maze of communications we’re stumbling through,’ which may well be true, but it doesn’t help to have a guide who seems to be using a slightly outdated map.  In his character sirbert’s words, previous generations lived in ‘a flat and two-dimensional world… a flat world in which information acquired by one eye was then vetted by the other’. It seems as though Self is examining the present day through a similar lens, and missing some of the nuance and detail.

Readers of this trilogy have been faced with diminishing returns. Shark was a patchy novel, with a noticeable gap of quality from one scene to another. Phone takes this trend further. There are great set pieces (Busner calling a sex worker up to his hotel room and, falling back on dimly remembered medical training, performing a gynaecological exam using a modified bottle opener, and a passage in which detainees at an army base in Iraq are organised into a choir to sing Crazy in Love stand out), but the gaps between them are like wading through treacle. Compared to similarly Modernist-inspired authors like Mathias Enard or Mike McCormack, Phone too often feels laboured.

Any Cop?: I remember reading Umbrella, with great excitement, and hoping that this trilogy would firmly place Self amongst the greats of English literature; since then, though, he’s been treading water, and the sequence ends with a whimper.

Hollow by B Catling

The Lady from the Black Lagoon by Mallory O’Meara

Are You Enjoying? by Mira Sethi

A Shock by Keith Ridgway

Winter in Tabriz by Sheila Llewellyn