On the Pile: November 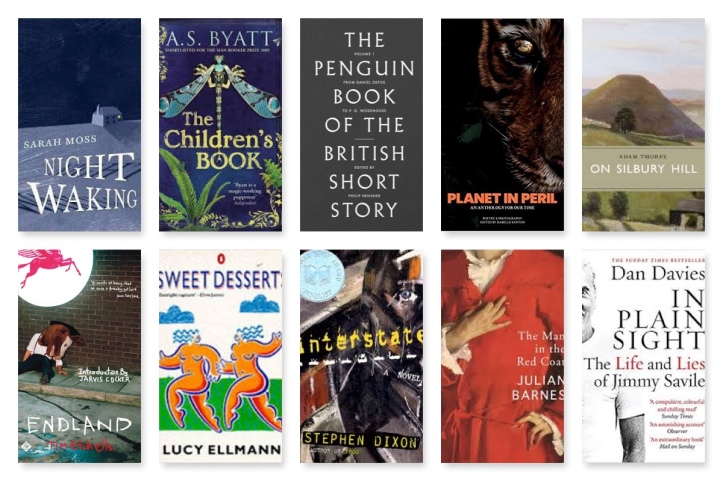 Name: Valerie O’Riordan
Just Read: The Topeka School by Ben Lerner – review to follow. Also should flag up that I finally finished (and LOVE LOVE LOVED) Lucy Ellmann’s Ducks, Newburyport.
On the Go: Tim Etchell’s Endland – review also to follow. So far, so great.
Next Up: I might reread Jennifer Egan’s Look At Me and/or The Keep, but A.M. Homes’ May We Be Forgiven is also eyeballing me from across the room.

Name: Chris Oleson
Just Read: Lucy Ellmann, Sweet Desserts: Her first novel, funny and intelligent story of two sisters; much shorter than Ducks, Newburyport but many more than one sentence. Lazlo Krasznahorkai, Baron Wenckheim’s Homecoming: Wow! Surpassed the hype that I’ve heard from a couple of readers/writers I respect.
On the Go: Interstate by Stephen Dixon which dramatizes the same horrific shooting in a series of differently envisioned twists of fate. Dixon, a vastly overlooked American writer, died earlier this the month. John Fante, Wait Until Spring, Bandini.
Next Up: Garth Greenwell, What Belongs to You, Justin Torres, We the Animals, Lazlo Krasznahorkai, The Last Wolf.

Name: Pete Wild
Just Read: The Man in the Red Coat by Julian Barnes. Sumptuous Belle Époque nonfiction. Review to follow…
On the Go: Joe Hill’s Full Throttle. Patchy would be an understatement…
Next Up: Lake Like a Mirror by Ho Sok Fong. Heard a lot of good things about this short story collection… (Can’t be worse than the Joe Hill anyway!)

Name: Fran Slater
Just Read: Louis Theroux –  I’ve Gotta Get Theroux This – I’m about to write my review, so won’t go into too much detail. Just to say that, if you’re a fan of the man himself, there’s a lot to dig into here. Give it a go.
On the Go: In Plain Sight – Dan Davies – Theroux talks a lot about his relationship ship with Jimmy Savile and it made me feel that I should finally give Davies’ critically acclaimed investigation of the now infamous former TV presenter a go.. I’m only a couple of pages in, but doubtful it’s going to be a bed time read.
Next Up: Roxy – Esther Gerritsen – Another one on the Bookmunch pile, I know next to nothing about it. But the blurb had the words grief and revenge in it and that sounds like exactly my kind of misery.

Name: Carola Huttmann
Just Read: Night Waking (2011), by Sarah Moss. This is the novel that, I think, first brought Moss to public attention. Set in part on the Hebridean island of Colsay it’s the story of a writer struggling to work while tending her insomniac toddler. When she discovers the body of a baby buried in the garden she becomes obsessed with finding out how it came to be there.
On the Go: By reading Fiona MacCarthy’s excellent biography Last Pre-Raphaelite: Edward Burne-Jones and the Victorian Imagination (2011) I am continuing to feed my ongoing interest in art history and the lives of artists. It’s a beautiful tome that does full justice to the complex character of this Victorian artist and close friend of William Morris.
Next Up: The Children’s Book (2009), by A.S. Byatt is a novel about a children’s author working during the Victorian and Edwardian eras and the impact her writing has on her own family.

Name: James Doyle
Just Read: Tombland by C.J. Sansom. This is two novels in one, Shardlake investigates a murder and there is the addition a full-length historical novel about the Norfolk rebellion of 1549. As fascinating in its period detail as all of the Shardlake novels. Particularly interesting is its parallels with the atmosphere of Brexit Britain: “A new world is dawning, the rich will be put down and the common man will have his own land, his own trade, his own life!”
On the Go: The Penguin Book of the British Short Story edited by Philip Hensher, volume 1. Hensher selects from a startlingly wide range, introducing writers I hadn’t heard of (most notably Dorothy Edwards) but who I intend to read more of.
Next Up: Elizabeth Taylor’s The Blush,  a collection of short stories. Moments of life that press against the demands and constraints of other people: “Such an odd character they thought him, forgetting – as, of all people, the English should not  – that characters are encouraged at the cost of their families’ destruction.”

Name: Jackie Law
Just Read: Planet in Peril edited by Isabelle Kenyon. Anthology of poetry, photographs, artwork and think pieces exploring climate change. While not exactly cheery reading there are nuggets of fine writing and some impressive illustrations. Still gathering my thoughts on this one.
On the Go: The Ground is Full of Holes by Suzy Norman. Only just started but not sure the writing style is going to suit me. Hoping it picks up soon or will be DNF’d.
Next Up: On Silbury Hill by Adam Thorpe. From the excellent Little Toller Monograph series, this book focuses on an iconic prehistoric mound that is situated close to where I live.